What is that quote about the universe laughing when you make plans? Well, let's just say that this post is coming out about ten days later than I'd like. That comes down to a number of reasons, but the big one was the worst, most raging sinus infection I've had in years. It obliterated me. I was actually rather impressed. Still, I soldier on. At the same time as my infection, I've taken on a new position (more on that below), so my other projects are moving a bit slower at present. I look forward to that changing soon. Add in a family emergency all in the last two weeks, and you get a recipe for late posting. So, without further ado...

Another year come and gone. Remarkable, isn't it? I remember this time last year when we were all wishing 2016 good riddance. There was a distinct unity to our discontent. Celebrity deaths took too many beloveds. The presidential election threw just about everyone. People were just...unhappy with life. When the wheel turned, more than a few lifted a middle finger to '16, myself included.

This year, it's a little different. Some people were ready to give 2017 the old boot. While I had my own concerns regarding this year (not the least of which being that sinus infection I mentioned above), I found that it was decidedly better than 2016. So I nod more fond farewells at this turn of the year than sour ones. 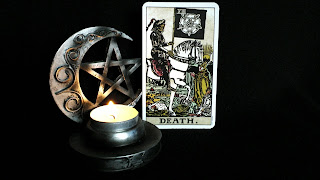 ...And there were definite farewells. Did you know the Death card of the tarot doesn't actually mean "death"? It actually means change, that concept that when we shuffle off the mortal coil, we are actually just making a change of venue, of scenery (actually that's a very loose definition, but you get the idea). And this was such a year of change: upheavals to be sure, but what those sharp lurches created were moments of true inspiration, motivation, and focus. All things being equal, I view it like that card. Letting go of certain things so that other things could flourish.

Here are the highlights:

Email ThisBlogThis!Share to TwitterShare to FacebookShare to Pinterest
For more like this: Discovery, Dreams, Enterprises, Fulfillment, Goals, Philosophy, Quote, Success

Inspiration Quote Tuesday: Get Out of Your Own Way