Freedom Fridays: A Little Break (A.K.A. Why We Do What We Do)

I've been a little lax the last couple weeks on Freedom Friday posts, and there's been a reason. Several, actually. However, the three main reasons are what I'm writing about this week.

Why We Do What We Do

I'm in the middle of two major projects right now and, in addition to my regular work, they are consuming every last bit of my free time. That's okay, though, because these are the kinds of projects you want to do, the things that you do "the job" for, the projects you hope you get paid for instead of relegating them to hobbies. In other words, these projects are the answer to that popular question: "Why do you do what you do?"

I love movies...watching them, making them...they're one of my top passions. What better way to celebrate them than to go to Comic Con, right? It starts today here in the Omaha Metro area, and I've been working on a couple different projects related to it.

If you haven't been to see this movie, I definitely recommend it. It's a bit different than the first movie: darker, somewhat more serious, and in some ways far sillier, but it doesn't disappoint. Better than that, it gave me inspiration for my Comic Con costume for this year: Domino. I wanted something that would be fairly simple to put together, mostly from my own store of costuming and Burner supplies.

Of course, it's never as simple as you think it will be. I still love the process, even when it vexes me beyond measure. ...oh, yes, I mean vex. One of the pitfalls of trying to do things on the cheap is that it invariably takes longer and creates more frustration. The upside is the weird new techniques you learn when you are trying to figure out how to create with fewer resources. It's something I sometimes fear we're losing in our culture...but then I go somewhere like Burning Man, or work on an indie film, and my faith is restored. Which pretty much brings me to...

The old adage is correct: if anything can go wrong, it will, and at the worst possible time. It might also be the motto for filmmakers. "Hurry up & Wait" is the current motto, and conveys the same basic insight, but is less of a mouthful.

So it was as my brother, Kaleb, and I worked on a short film to play before O-Con. He'd had some cool ideas for a little back and forth with he and his best friend, and we set out on Saturday to make it happen. And everything went wrong.

In case you didn't know, Iowa has chiggers...and if you don't know what those are, you don't really want to. Nasty little red mite bugs that leave nasty red welts wherever they go. So, we prepared for chiggers with this chigger repellent that is marketed toward soldiers. It worked; no chigger bites. What we didn't do was prepare for mosquitoes, which, as it turned out were all over our film location. We're talking plague levels. I was worried we'd actually catch the whine of mosquito flight in our audio. We didn't, but I have at least twenty new bites to show for it. I think I took about that many out along the way, so I'll have to be satisfied with that.

In between fighting bugs, we had heat, prop, and costume troubles to deal with, which is standard fare when filming. Alas, we had to cut it short. Thankfully, we got enough good footage to make a teaser, and hope to do more at a later point. It's not posted yet, but here's a sneak peak of the commercial (inspired by the video game "Fallout") we shot last week that goes with the short:


In addition to the costume and filmmaking, I've spent the last few weeks working on some paintings to enter in an upcoming art show. Painting is something I'm something of a novice at, despite having learned painting techniques decades ago. As an artistic outlet, it is definitely more hobby than professional endeavor. I still enjoy it, and like to take opportunities which inspire something personal in me as they arise. So, "Totems"? I say, hell yes. If you're interested in more info, check out the Facebook page for the event. Here's the flyer: 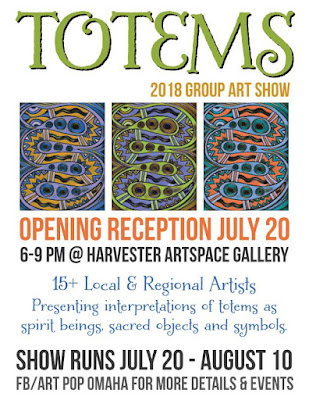 How We Do What We Do

Being an artist in this day and age is...difficult. We live in a world that wants us to pay our bills as we create, but seldom pays us the respect of offering fair value for our creations. Everyone wants something free, and with the access we have to technology highlighting the plethora of talent out there, people rarely understand the true worth of what they're asking. So finding a way to survive as an artist takes some creativity in and of itself.

I discovered Patreon through my brother, Kan Lamat. The site helps artists to get their work out and survive by connecting them with people in a similar way to how artists once worked (and sometimes still do) with patrons. A potential patron can contribute to the artist, and the artist gives them exclusives on upcoming projects, specific rewards, and news on their process. It's a cool system, and  I've been working on my own for the last month or so. It's nearly ready, and I'll be launching soon, hopefully by the end of the month. So stay tuned if you're interested in a new way to keep up with my ventures.

I'll be back to Freedom Fridays by August. Keep a weather eye out!

So, how do you find passion and the means to do what you do? That's the big question I am always looking to answer on here. I'd love to hear your stories, to hear what drives you, and helps you succeed. To be an artist is to be a revolutionary, one project at a time.

Had some cool passion projects lately? Feel free to share below!

What do you think?

Email ThisBlogThis!Share to TwitterShare to FacebookShare to Pinterest
For more like this: Comic Con, Costuming, Filmmaking, Painting, Patreon